Pozzallo, Augusta, Catania, Lampedusa, Palermo: people continue to arrive in Sicily, crossing the sea from Libya. In the bays of the coastline, the rescue missions continue, as do the shipwrecks and death. Migrants are dying in the freezer trucks which transport them like the cargo they have become from the deserts to the Libyan coast, from where the attempt to reach Europe is usually made. Those who found themselves cited in the daily papers last week make up only a small percentage of the thousands who are trafficked every day. Whoever does make it to Italy tries to explain the horrors they have seen, far too often left unheard.

The accounts from the survivors are clear and detailed, but few seem to listen to them. The EU is currently constructing the basis for an understanding with Libya, to halt the departure of migrants, with the aid of the Libyan Coast Guard, who instead find themselves collecting the dead from the sea, when the bodies are not brought on to the shores by the waves themselves. Indeed, Italy has already signed an agreement with the Libyan authorities to combat human traffickers and to reduce the number of arrivals, in a deal recognised for now only by the government in Tripoli, with unclear consequences, but a deal which nonetheless remains alarming in its hypocrisy.

And while the rhetorical comments pile up, and discussions multiply without revealing the real interests of the institutional agents, the silence of those actually forced to confront death on a daily basis is absurd, those who do not speak, sometimes by choice, but too often are forced not to.

On Sunday 19th February the Golfo Azzurro docked in at the port of Pozzallo: 466 migrants were crammed on board, including around 100 unaccompanied minors and various women and families, coming from Pakistan, Bangladesh, Subsaharan Africa and even from Syria, all rescued from near the Libyan coast in one of the many operations of recent days. In harsh weather conditions, the rescue and transfer operations were forced to include the Italian Coast Guard ships and the Siem Pilot of the Norwegian navy, otherwise deployed in Frontex's search and patrol mission. The landing operations at Pozzallo followed the well-known script, in which the investigations and control procedure have become the dominant activity at the quay, where a dozen witnesses are immediately separated out from the others, along with the first three “alleged boat drivers”. 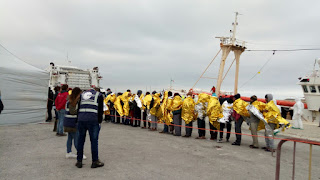 Neither the scorching summer sun nor, as now, the strong wind and rain, have ever put a pause to the investigations, even when the migrants are hardly even clothed, and when at times women, families and minors are forced to wait for extended periods of time. Selections, control and transfer are all carried out without any guarantee of appropriate interpretation, activities which will all form the basis for future criminal procedures which fall on refugees who are ever more frequently simply left outside the prison after a few days.

Silence falls on the groundless promises made to the witnesses in order to gather names; on the terror in the eyes of those who have been pointed out by their travel companions, and remain with a blank stare for hours; on the non-existence of an initial “welcoming” worthy of the name, whether they are hosted in the one big room of the Pozzallo Hotspot or in the tent-city in Augusta, or the CARA* at Mineo. The noise is instead reserved for the names of the alleged boat drivers who have been arrested, for their age and what country they come from; it is apparently less important if they are then released, some of them exonerated, others imprisoned without even having a chance to explain what they went through before ending up on the boat, because – strangely enough – they still cannot speak Italian.

In the meantime there will be the usual expulsions, the running away from the emergency centres, the selection of migrants who will receive the right to protection on the basis of their nationality alone. All of the illegitimate practices which permeate the so-called “welcoming” system, problems witnessed not only by the lawyers but by all the institutional agents, members of NGOs and otherwise, the workers in the different structures and all of those who come head to head with forced migration. Some rail against European policies, laying the blame far away, while many keep silent about these daily violations, as if they were not part of a structurally violent system itself.

To have a voice and be heard remains, for the vast majority of refugees, a right yet to be won, given that they arrive in a place where this possibility is guaranteed only in some rare cases. These are the rare instances in which, doing their duty despite all the difficulties, people manage to create real moments of social inclusion, and the kind of socialisation which the institutional reception centres are meant for, on the basis of civic cohabitation and active solidarity. To understand Italian, to have contact with the local population, to gain awareness and responsibility of their own situation – these are the basic activities which allow migrants to not feel they are only numbers but people, with the capacity of self-determination and an equal footing.

In many other instances, however, those who arrive are faced with marginalisation and exclusion, both material and social. Just learning Italian is a mirage for those in the reception centres far from any inhabited zone. We can take the case of 'E.', an unaccompanied minor who has been housed for around 6 months in an initial reception centre in Chiaramonte Gulfi, a village in the province of Ragusa. The building is managed by Opera Pia Rizza Rosso, a body which already manages an Extraordinary Reception Centre (CAS*) which was closed last summer, but which has now been entrusted with around 20 minors. The only Italian lessons here are those organised every other day in the building itself, and the weeks go by among the “obligatory” football matches, boredom and solitude. Living in isolation, without any interaction with Italians of the same age, and without any accompaniment into the host community leads simply to frustration, anger, depression and above all a desire to run away, without any plan.

“The only reason I haven't run away from here these past years is because at the beginning I was too weak and didn't have any money”, 'S' tells us, who has been “hosted” since 2015 in a CAS on the edge of Vittoria (Province of Ragusa). “It was really hard at the beginning because I didn't understand anything, and the less I understood the bigger my problems got” he continues, by now speaking fluent Italian. 'S' is from The Gambia, and met us in the summer 2015, when he was still staring at the ground while talking, and obsessively repeated how it would be impossible for him to learn a single word of Italian because “my head was always somewhere else” during the lessons. It was also almost impossible for him to go to school: the building where the evening classes are held is several kilometres from the building where he lives, taking at least half an hour by bicycle, and the winter cold and dark makes the journey truly dangerous.

So no school. No new friends; just the sporadic tensions inside the CAS, where radiators and heating only turned up a few months ago, allowing the young men to sit in the sitting room without problems, without having to constantly move around and leave in order to warm themselves up. This is a clearly desolate situation, which 'S' decided to confront by calling on all of his resources. “I realised I could study on my own, with the books they were giving me. I began to understand things, and above all I could explain myself. Finally I can speak with my lawyer, who I meet with, I can say how I feel to those who will listen to me. In my country they put people in prison to stop them from talking; here, no – but I've learnt that there are other ways to make people stay silent.”