The New Tent Structures At The Port of Palermo

Last Saturday, the Norwegian Frontex vessel Siem Pilot docked at Palermo, bringing with it a cargo of 1,000 migrants. We use this term because this is exactly how people are treated: like goods. Below we publish a letter sent to us by a volunteer who attended the port for the first time.


“Dear editors of the Migrant Sicily blog, I'm writing to you in order to share the rage which I still feel after the migrant landing at Palermo on Saturday 25 February at 8am. As a legal support worker, I'm turning to you because I read your blog with pleasure, a blog which often provides space to the voices of people following you. Furthermore, I'm certain that no newspaper would publish my reflections below. This knowledge comes from the fact that no newspaper, TV channel or other media said what happened in Palermo at the last landing, with all the attention being laid instead on the birth of a baby on board the Norwegian ship. 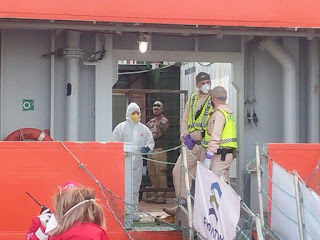 No one spoke about the confused moments when the navy personnel on the Siem Pilot refused to hand over people's personal belongings, such as phones, glasses and documents which had been taken while on board. Only the intervention of some volunteers allowed a few women to retrieve their belongings. This was clearly an abuse of power, given that there wasn't even any written record provided of the confiscations. It could even be called theft, enacted on people who are usually forced to undergo this form of harassment not only in Libya but also in civilised Europe.

What's even more shameful and inhumane is the breaking up of whole families, separating small children from their mothers. It was chilling to watch as a group of volunteers held small, crying children in their arms while waiting for their parents to disembark. I asked some of the other volunteers for an explanation, and they told me that it was the first time they had seen anything like it. It was only thanks to painstaking work by some of the staff present that allowed some of the families to be reunited, even if not all of them. In fact, this dividing up of nuclear families, enacted by the captain of the Siem Pilot, put the authorities in huge difficulties, as various errors were made: one woman was taken to one region while her daughter to another.

Under pressure from UNHCR* and IOM* staff, the representative from the police station eventually responded by shrugging their shoulders and saying that “sooner or later they'll see each other again.” I wonder if the officers would have used the same inhuman, superficial words if it were their own daughter who had been separated from them, having crossed the desert, Libya and the sea. The attitude of some of the Frontex officers was also inhumane. We were unable to carry out the distribution of food, clothes and shows because they were poised like vultures, ready to pose questions obsessively to the half-naked, barefoot, freezing and starved migrants.

A Caritas worker intervened several times to ask the officers to stand back so that we could do our work, especially because they have all the time they need for theirs, as well as the possibility to use an area of the port dedicated to the pre-identification procedures, next to the police station's base. 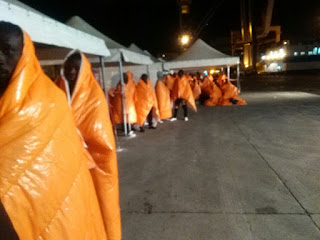 I got even angrier when I saw a military regiment (police, guardia di finanza, Frontex) descend from the ship with 15-20 people, mainly North Africans, who were taken to a reserved section of the quay. I asked some other volunteers what was going on, and they told me that they were the alleged boat drivers, and that that part of the quay would later be used for the identification of the witnesses. They told me that the dynamics of selecting the alleged boat drivers is fairly vague, and often people are utilised for the investigations and then abandoned. The alleged boat drivers are splashed across the first page as monsters, in order to nourish a propaganda about security threats which needs its scapegoats. It is extremely doubtful that these people are connected to criminal organisations.

There were a lot of children among the people who landed, but in order to get milk to the new borns and infants we had to make a collection, because no one from the local council or the Red Cross had brought any milk. A volunteer from Caritas asked Councillor Ciulla several times for it, but they told us that this isn't the first time this has happened. Even ASP (the provincial health service) shrugged it off. What makes me even angrier, however, is that everyone wants a photo on board the ship with the baby girl, a shameful hypocrisy. In the end, more than 300 people were crammed into the tent structure which wasn't even ready for use. They slept on the floor, one on top of the other. Not even those with scabies were separated from the others. I just ask myself why, despite all the time to do it, the council and the Prefecture didn't organise the tent structure so as to accommodate everyone in a dignified manner. I felt a deep shame to see all these men, women and children crammed together like in a labour camp. 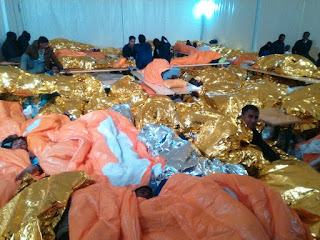 It was only following the complaints by some of the volunteers that those with scabies were separated from the others, and the women and children were made ready to depart as soon as possible. I don't understand why, as soon as the landing itself was finished, ASP and the Red Cross immediately left, leaving the people on their own.

Safe in the knowledge of your attention, I hope that you continue with to officially report such situations.”

These are strong words, and on hearing them we could not but publish this report by our reader, whose anonymity we will conserve as requested. We have learnt that of 995 people who arrived, 500 were left to sleep in the tent structures and the port itself, as has occurred at Palermo in the past.

The institutional agents need to organise some kind of functioning coordination in order to avoid such situations in the future, and instead offering a dignified reception to those who arrive. We share our reader's shock, and hope that someone will provide with some kind of reply. And we hope the media reports about what actually happened instead of pretending nothing is going on, perhaps in order to please some politician or other.

And while people continue to die due to an inhumane migration policy, in Palermo even reception at the port is becoming a problem: as an initial episode, this does not bode well for the use of the tent structures.